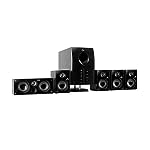 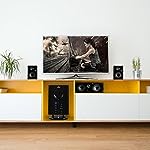 SURROUND SOUND: With the auna Areal 525 active 5.1 surround sound system, you can experience films, music and video games even more intensively than you ever have before. The 5.1 input takes up the surround sound of DVD players and BluRay players.
POWERFULLY LOUD: The central point is the active subwoofer which powers the five satellite speakers. The side-firing bass reflex subwoofer produces a room-filling sound with 5 x 15 watt + 50 watt RMS power in combination with the satellite speakers.
WIRELESS: The Bluetooth interface of the auna Areal 525 system allows wireless streaming of music tracks via smartphones, tablets or laptops. Menus and sound settings may be comfortably and easily controlled via the supplied remote control.
LIMITLESS: Via the USB port and SD card reader, the 5.1 surround sound system communicates with portable MP3 storage devices, such as USB sticks and SD cards. Media from laptops, CD players or MP3 players can be played via the backside AUX input.
ELEGANCE: The auna Areal 252 5.1 sound system is visually appealing thanks to its elegant overall design, which can easily be integrated into most decorative styles. The satellite speakers impress with their black high-gloss housing and stand base.