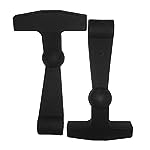 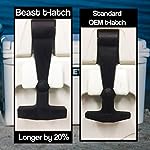 DON’T JUST REPLACE YOUR YETI LID LATCHES, IMPROVE THE PERFORMANCE! – These 2-packs of BEAST Replacement Lid Latches makes the repetitive task of opening and closing your cooler lid easier
WILL THEY WORK ON MY YETI???? – The BEAST Lid Latches are designed to be compatible with the Yeti lines of Tundra and Roadie hard coolers. Easily replaces the OEM lid latches utilizing the same pin
SAVE THE KNUCKLES! – We have designed a lid latch that will take less of a toll on your knuckles and fingers. The Beast Lid Latch is longer between the catch ball and t-handle to allow for more room for your fingers and knuckles to fit!
THESE PATENT PENDING LATCHES ALLOW YOU TO CLOSE THE LID WITH YOUR FOOT! – As shown in the product images, the BEAST lid latches are durable enough and large enough to push the t-latch in place using your foot. This saves the beating that your fingers and knuckles take from opening the lid 20 to 30 times a day
UNLIKE OTHER LID LATCHES, THESE COME IN A 2-PACK – All BEAST lid latches come in a 2-pack instead of selling a single latch. If one has broken, the next one won’t be far behind so it’s better to replace both!