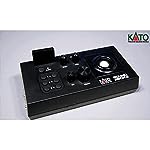 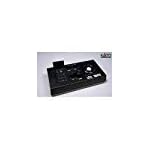 The analog sound box has been developed as a joint effort between engineers at Kato and Soundtracks to craft a simple, versatile, and powerful sound system for use on non-dcc layouts. Completely self-contained, the ASB has a built in speaker and will allow modelers to enjoy an “in-cab” experience while operating their favorite trains! Using separate plug-in sound “containers”, cartridges each with their own individual sound and programming sets (even including things like momentum!), the ASB is a “smart” device, not just making sounds but reacting appropriately to the actions of your locomotives by reading back-emf from the motors. Steam locomotive chuffs will speed up and slow down according to the speed of the locomotive itself; not just the position of the throttle, making the sound a properly interactive experience!
The modular pass-through design of the analog sound box means that it can easily be used for both N and HO scale!
The analog sound box will ship with an included early EMD 1st generation diesel sound chip, but additional diesel, steam and Electric sound sets will be available (sold separately) that will allow you to bring nearly any sounds that you desire to your non-dcc layout!
The sound box doesn’t just make noise – It will read the strain on the motor in your engines and know how fast they’re moving and how hard they’re working. Certain sound Schemes (like steam where the chuff is directly linked to the visual movement of the side rods) will self-adjust the sound based on the speed of the locomotive so what you hear will match what you see, all without the need for DCC!
Have a powerful Home stereo system? Or maybe you’d prefer headphones so that you don’t wake the neighbors- unlike sound Systems that are Tied to a locomotive, the analog sound box has a stereo out port so you can connect headphones or speakers of your choice!
Designed to easily connect to the Kato power pack (sold separately)