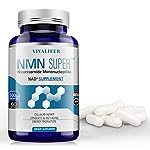 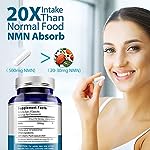 Energy Required to Catalyze Physical Activity:NAD converted by NMN is an important coenzyme in the mitochondrial aerobic oxidative metabolism of tricarboxylic acid cycle to generate energy molecule ATP, which acts as a hydrogen ion receptor, which transfers hydrogen ions to oxygen, so that the body can obtain three major nutrients, converted into energy and other metabolic substances required by the human body through the tricarboxylic acid cycle.
Anti-Aging:NAD + maintains the chemical communication between the nucleus and the mitochondria. If this communication is weakened, it will lead to the decline of mitochondria. The decline of mitochondria is an important reason for cell aging, so the use of NMN can better fight aging.
Maintain Capillary Regeneration:As we age, the NAD + contained in the body decreases, the growth factors released decrease, and the capillaries become more and more fragile.NMN can play the maintenance effect.
Alcohol metabolism:The process of alcohol metabolism will secrete harmful acetaldehyde, which needs to be further decomposed into harmless acetic acid. NMN can perform a catalytic action to decompose alcohol into harmless acetic acid and reduce the harm of alcohol to the human body.
Powerful repair function:Repairing DNA damage and regulating or silencing other genes.NMN can re-encode the damaged gene according to the normal gene sequence, thereby repairing the gene.