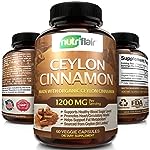 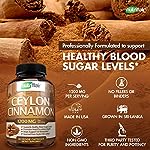 ✔️ 120 CAPSULES ✔️ BEST VALUE AVAILABLE & 100% SATISFACTION GUARANTEED – Contains 120 Vegetarian Capsules for a full 60 day supply. Each Serving of 2 Capsules provides 1200 Milligrams of Ceylon Cinnamon.
✔️ MADE WITH ORGANIC CEYLON CINNAMON, 100% NATURAL – NutriFlair Ceylon Cinnamon Supplement, Made with Organic and Natural Ingredients, is a powerful antioxidant, free of GMO Ingredients. Supports healthy blood sugar levels, promotes heart health, helps with weight management, helps with joint pain, and serves as a power anti-inflammatory supplement
✔️ SOURCED DIRECTLY FROM CEYLON (SRI LANKA) – Our Cinnamon Ingredients are sourced directly from Ceylon (Sri Lanka) hence the name Ceylon Cinnamon, which is also known as “true cinnamon” or “Cinnamon Verum Bark.” The Ceylon Cinnamon is the highest quality available and is in very high demand, and as such is more expensive than the common Cassia Cinnamon. Contains NO Stearates or Artificial ingredients.
✔️ SAFER THAN CASSIA CINNAMON – Always look for CEYLON Cinnamon when shopping for Cinnamon Supplements; this is the most effective and safest type of Cinnamon Supplement. The alternative Cassia Cinnamon, which is also commonly known as Common Cinnamon, may be toxic when taken as a supplement or used in large doses over prolonged periods of time.
✔️ OUR GUARANTEE – The NutriFlair Ceylon Cinnamon is backed by our 60 Days, 100% money back guarantee. Feel Healthier and Stronger, or your money back. No Questions Asked!